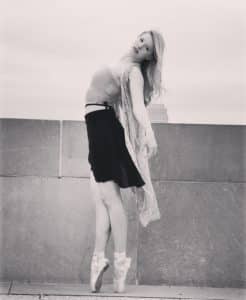 Mckenna describes Catherine’s Dance Studio as a small, caring and fun environment to learn to dance in. Unlike her former dance studios, Catherine’s is not drama filled and is a very beautiful place to be.

After her graduation in May, Mckenna will be attending Maple Woods and plans on transferring to Missouri State.

McKenna received a 2nd place finish award at the Kids Artistic Review Competition, which took place at the Overland Park Convention Center, for her solo dance. She also competed at Nextar. She performed in the group dance (blue and green connected by gold piece outfit) and solo (for lyrical).
She has an older brother and sister who are married with kids and is an aunt to three nieces and one nephew. They were all in attendance at The Liberty Performing Arts Center to watch her final recital. Her niece also attends Catherine’s. Mckenna would like to stay at Catherine’s as an assistant.

Her Mom, Theresa and her Dad, Greg have been very supportive of her dancing. They have been at every performance, and she appreciates their financial support for her dancing.

When Mckenna graduates from college, she would like to be an athletic trainer. Her plans are to get her masters and work in a clinic.

She describes Catherine as a great teacher, role model, and amazing dancer. She believes It is crucial for her dance teachers to be good role models because “when you spend a lot of time with someone it is important that I can look up to her. “ 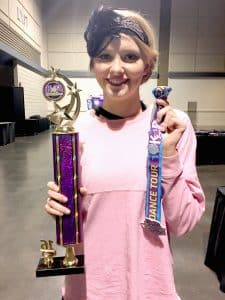 What she likes most about dancing is it is a fun way to stay in shape. She enjoys meeting new people and the relationships she has built with people at Catherine’s Dance Studio.

Mckenna believes that kids should start dancing when they are little. She started when she was young. She also did gymnastics for a while and came back to dance. Once a dancer, always a dancer.
Catherine’s Dance Studio is happy to say we were part of Mckenna’s dancing career.

She, like all of our past graduating seniors, will be missed, but we hope she knows she will always be part of our dance family.