Children get their inspiration from many different places; watching their parents, teachers, their coaches, being outside, watching TV and going to a movie. If you want to inspire your kids to dance or if your kids are interested in dance, there aren’t many places to see people enjoying it besides a dance class. You could take your child to a ballet or your local high school when they put up a musical.

A movie is a great way to inspire children and adults. Since there aren’t too many family-friendly movies in the theaters all the time about dance, we’ve put together a list for you to consider. Many of these movies can be purchased used or downloaded online.

The movies listed here are all G, PG and PG-13 films. Of course, there are some excellent dance sequences in movies that are not listed here but may not suitable for young children and families. So make a bowl of popcorn, dim the lights and enjoy these family-friendly dance movies and see if your kids are not inspired to get up and move and are extra excited about their next dance class at Catherine’s Dance Studio!

A Ballerina’s Tale- NR
A feature documentary on African American ballerina Misty Copeland that examines her prodigious rise, her potentially career-ending injury alongside themes of race and body image in the elite ballet world.

Isabelle dance into the spotlight- G
Nine-year-old Isabelle is an inspired dancer with a flair for fashion design. She’s thrilled to be studying ballet at a prestigious performing arts school.

Shall we Dance – G
A budding romance between a ballet master and a tap dancer becomes complicated when rumors surface that they’re already married.

Singin’ in the Rain- G
This movie is a lighthearted depiction of Hollywood in the late 1920s, with the three stars portraying performers caught up in the transition from silent films to “talkies.” 1952

Happy Feet- PG
Into the world of the Emperor Penguins, who find their soul mates through song, a penguin is born who cannot sing. But he can tap dance something fierce!

Another Cinderella Story – PG
A guy who danced with what could be the girl of his dreams at a costume ball only has one hint at her identity. And with a once-in-a-lifetime opportunity in front of him, he sets out to find his masked beauty.

Footloose (1984) -PG
A city teenager moves to a small town where rock music and dancing have been banned, and his rebellious spirit shakes up the populace.

Leap- PG
An orphan girl dreams of becoming a ballerina and flees her rural Brittany for Paris, where she passes for someone else and accedes to the position of pupil at the Grand Opera house.

Mad Hot Ballroom- PG
A group of 12 teenagers from various backgrounds enroll at the American Ballet Academy in New York to make it as ballet dancers and each one deals with the problems and stress of training and getting ahead in the world of dance. 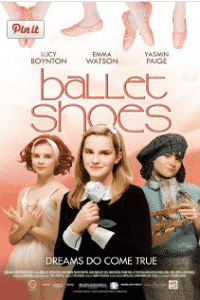 Fame (2009) PG
The original 1980 movie is better but rated R. This is an updated version of the 1980 musical, which centered on the students of the New York Academy of Performing Arts.

Strictly Ballroom- PG
A maverick dancer risks his career by performing an unusual routine and sets out to succeed with a new partner.

Step up- PG -13
A boy receives the opportunity of a lifetime after vandalizing a performing arts school, gaining him the chance to earn a scholarship and dance with an up and coming dancer.

Footloose (2011) PG-13
City teenager Ren MacCormack moves to a small town where rock music and dancing have been banned, and his rebellious spirit shakes up the populace.

Take the Lead- PG-13
The real story of a dance teacher who believed in the talent of a group of problem kids.

Shall We Dance- PG-13
A romantic comedy where a bored, overworked Estate Lawyer, upon first sight of a beautiful instructor, signs up for ballroom dancing lessons.

Save the last dance- PG-13
A Midwestern girl moves to Chicago, where her new boyfriend is a teen from the South Side with a rough, semi-criminal past.

White Nights- PG-13
An expatriate Russian dancer is on a plane forced to land on Soviet territory. He is to become a dancer for the Bolshoi again, but he wishes to escape, but can he trust the American?

Center Stage- PG-13
A group of 12 teenagers from various backgrounds enroll at the American Ballet Academy in New York to make it as ballet dancers and each one deals with the problems and stress of training and getting ahead in the world of dance.

There are many people and many places that we can be inspired by in our lives. The movies are a great place to be inspired and watching a dance movie with our kids is a great way to spend time together!

This article was originally posted in February 2015. Edits have been made and reposted with updated information.