On March 4-6, The Competition Team from Catherine’s Dance Studio took part in the weekend long Nexstar dance competition. The competition was a first time experience for a significant number of those on the competition dance team. Besides preparing for the actual performance, the dance students who competed discovered a positive bonding experience with one another during the weekend as they supported, cheered for and shared the ecstasy of receiving awards, setting goals for the future and being proud of their “first-time” to complete experience.

The entire competition team was at Nexstar on the last day of the competition. Allie McMichael and Laura Richey Duet-. This duet received a Special Judges Award for their performance of “I am a Good Girl.” This performance was a sassy, upbeat performance in hot pink costumes. Getting this award made all the work and preparation extra meaningful. Check to see what they placed in their category and what they placed overall. 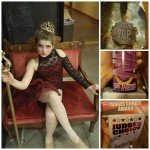 Miss Sam arranged the choreography for their dance “Nothing Better to Do,”  which placed 4th  for this Small Group. “They did very well for their first time completing.said Catherine Stephenson, owner of Catherine’s Dance Studio in Parkville, MO. Catherine was also very pleased with their stage presence. The high school team was there to support and give encouragement both backstage and during the performance.

Next was the High School Small Group  performing “The Garden,” which took the 1st place prize for their performance. Except for Alley McMichael and Laura Richey, this was the first time competing for the members of this group.

“To get up on that stage is awesome and it takes a lot of guts,” said Catherine.  “The added adrenaline during a competition is different than performing at a recital as you know you are being judged.”

For Catherine, one of the best parts of the Nextstar competition was having the girls spend time together. During the long break between the group and solo performances, the competition team watched other studios perform, and took advantage of the time to be together to have some much-needed bonding time. Like any team, this is a benefit for everyone on the competition team.  This important bonding process helps girls “dance as one person”, brings them closer and more connected. This can be evident by the judges in the way they dance and interact with one another on stage. The experience of watching other studios, whose dancers have been competing for years, helped the girls set new and bigger goals for themselves personally and their dance teams.

The Solo Performance by Alley McMichael called “Emergency,” placed 1st.  This was the first competition solo for Alley. (She had previously completed a duet with Laura the day before, and placed 2nd with “I’m a Good Girl).  McKenna’s Flaugher’s solo, “Elastic Heart,” earned her a 3rd place award.  Laura Richey placed 4th, at the intermediate level, for her solo, “Feeling Good.” All the competition dancers felt confident about their performances, and Catherine reported the performers did amazing for their first competition. Catherine knows that being together and performing together made it all worthwhile.  She, along with the members of the competition team, are confident that they will only get better. Awards